The answer is both yes and no. No, in the sense that there aren’t any rituals, rites, ceremonies one has to go through, or laws, rules and regulations that one has to perform in order to become a Christian. From that perspective one cannot become a Christian. The essence of biblical Christianity is that something has been done for you, and you receive and accept that by faith. That, in a nutshell, is how one becomes a Christian.  The question then becomes, what is it that has been done for us, that requires us to receive it by faith? Our understanding of the Christian faith hinges on the answer to this question.

The essence of biblical Christianity is that something has been done for you, and you receive and accept that by faith.

When I was 11, a friend of mine told me in no uncertain terms that if I didn’t accept Jesus as Lord and Savior, I was going to go to hell. So out of fear, I knelt down beside my bed and gave my life to Jesus. In hindsight, I prayed that prayer out of fear, and did not have even a surface level understanding of what the Bible calls the Gospel or Good News. Did I become a Christian at the moment that I prayed that prayer? God only knows. But what I do know, is that now as a 37-year-old, struggling through life with my own brokenness and the brokenness of others, I am convinced that I am a Christian. Not because of what I have done, but because of what has been done for me by Jesus.

The premise of Christianity is that “all have sinned and fallen short of the glory of God”, as the Apostle Paul says in Romans 3:23. In other words, no one can stand before God and present their moral record as a basis for their right standing with God. That is because our moral records, being tainted with sin, are never good enough before a holy and righteous God. No amount of good works can ever justify our reconciliation with God. That presents a dilemma which every other belief system tries to solve by conjuring up laws that one has to follow, or good works that have to be performed. They do this in order to please God and gain his favor. They do this with the hope that we would be good enough to get his proverbial thumbs up. But unfortunately, as already mentioned, there is nothing that we can do that can ever be good enough to gain God’s acceptance.

…there is nothing that we can do that can ever be good enough to gain God’s acceptance. 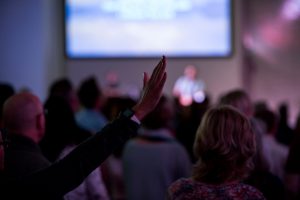 Therefore, God himself has to be the one to save and rescue us from this conundrum. Truth be told, it is more than a conundrum. Our sin separates us from God. That vertical separation causes a horizontal separation within ourselves, our relationships and the world. We feel fear, guilt, anxiety amongst other things within ourselves. Our relationships are broken. The effects of a fallen world through natural disasters are experienced by us every day. All this because God, as a holy and just judge, has to invoke his righteous judgement on the world, as a just reward for our sin and rebellion against him. We have a bigger problem than we would like to think.

We cannot save ourselves, and therefore God himself saves us through his Son Jesus. By dying on the cross, Jesus pays the penalty for our sin, so that our relationship with God is restored. Jesus is the perfect sacrifice because he is God and lived a perfect life on our behalf. He then died the death we should die.

…because of Jesus’ death we can now be at peace with God.

In Mark 1, as Jesus begins his ministry on earth, he says in verse 15 “Repent and believe in the Gospel”. The word “repent” means to turn around one’s behavior or way of thinking. Repenting from what, one might ask? Some say repent from sin. But repenting from sin doesn’t make you a Christian. We’ve already established the fact that we do not become Christians by doing something. We should repent rather from our sense of self-justification and self-righteousness. Repent from believing that we can justify access to God and heaven by our own works and our own self-righteousness, and rather believe that God is the one who justifies us through the work of his Son, Jesus. We need only believe. Paul says in Romans 4:5 that it is God who justifies the ungodly. This is such good news. God does the heavy lifting. We need only to have faith in this and believe!

As she stood there in the temple, her accusers smugly and judgmentally gazing down at…

Where to From Here?

In the first blog post of this series, we addressed the question of how to…

Wait … I have to help my kids grow in their faith too?!

Ahh parents, I feel your pain! Our parent to-do list is never ending. But I…