During my first year of university, I lived in a res on campus. In keeping with res culture back then, the first year student group had to endure a gruelling initiation regime, in order to earn our status as proud members of the res. During those months as first years, whenever we were granted permission to go home for the weekend, we knew full well that we were in for a gruelling initiation session upon our return on Sunday evening, so as to remind us of our place at the bottom of the food chain. And as expected, this particular Sunday night was no different.

After it was all over, I was walking back to my room with a friend. We had met just a few months previously, on our first day at res, and I had had the awesome privilege of witnessing God bring this guy to salvation in just three short months. And now, we were both on the journey of faith together, trying desperately to figure out how to live out our faith against the backdrop of everything that campus life was offering us. As we made our way towards our rooms that evening, we were discussing how God had been convicting us about our sinful indulgence in porn and the sexual sins it was leading us into.

… and I had had the awesome privilege of witnessing God bring this guy to salvation in just three short months.

We had both gone home for the weekend and had fallen horribly into these sins. And whereas before we would have just continued to pretend that everything was OK, this time around we both felt God convicting us individually to finally recognize that this was displeasing to him, to seek help, and to put it to death. God had brought us both to this place of repentance separately, in our own homes over the weekend, and we both felt like we needed to share this conviction with one other when we got back to res, so that we could beat this thing together.

We were deep in conversation about all this, on our way back to our rooms, when I noticed the shadow of a person coming up behind us, following us and trying to listen in on our conversation. I was incensed at what this guy was trying to do and felt like turning around and asking him: “Do you wanna die!?!” But, realizing that murder was another sin that I should probably restrain myself from committing, I decided to increase the pace of our walk, so that we could get away from this stalker – but the faster we went, the more he tried to keep up!

Surprise! I never even knew that this guy was a Christian! And as we began to talk more that night, the three of us were persuaded that God was bringing us together that evening, so that we could journey alongside each other towards greater holiness and love for him! We made our way to the campus fountain that night and, for some reason, knelt down at the base of it and prayed the first of many prayers we have shared together over the last 15 years.

“Guys! I’m a Christian too, and I’ve been struggling with the very same things you’ve been talking about.”

As I’ve journeyed with these brothers through the ups and downs of my Christian walk, here are two of the many things I’ve learned to value as to why doing life with other Christians is critical to our spiritual health…

Finally, we arrived at the entrance of our floor, hoping that if we stopped a distance away from the door, he would either continue walking past or head through the door. But to my horror, he did neither, instead making a bee-line straight towards us. I started confessing, “Father, forgive me, for I’m about to….”

I’ll never forget the words that came out his mouth that evening: “Guys! I’m a Christian too, and I’ve been struggling with the very same things you’ve been talking about. I also want to stop and live for Jesus more!”

1. Other Christians point us to, and remind us of, the grace and love of Christ which we so desperately need

I would have loved to have been able to report that, from that very night, our lives radically changed for the better – that we went from one degree of glory onto the next. But the truth is, we struggled for the next three years on campus, trying to love God, one another, and those around us.

But as difficult as those years were, far from giving up on us, God had given us brothers who could constantly remind us and point us to look to his grace and love for hope!

It’s so easy either to fixate on our sin and become dejected, or to take pride in the little progress we have made and become conceited. And we often fluctuated between dejection and conceit in those days. And so, the blessing of having a brother to point you to the grace and love of Christ in your worst moments, gives the soul much hope and perseverance, despite the messes you can find yourself in. It was critical to be reminded again and again by those brothers, that Christ was indeed a Great Saviour!

And as it turns out, one never graduates from needing to be reminded of this over and over again in life! Both sin and pride have a way of rearing up in various situations over the course of our lives. Therefore, having other Christians close enough to keep reminding us to place our hope in the love and grace of God, is absolutely critical for ongoing faithfulness and fruitfulness. 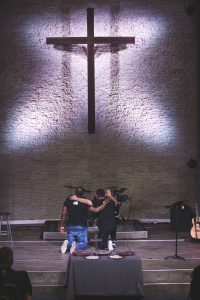 2. Other Christians pick you up when you no longer have the strength to stand on your own

What had brought me and these brothers together that night, was our desire to finally put to death the sexual sins we felt trapped in and live for Jesus in all purity. But, as many who have struggled in this area will attest, it can often lead to addictive, habitual patterns of sin!

Sinning habitually can become very overwhelming and depressing. And when you’re at the bottom of that pit, much against the wisdom of God, you can find yourself wondering whether the fight against sin is worth it. We each had individual moments over those years when the fight was just too intense and tiring, and when we felt like we would be better off just turning our backs on God!

Praise be to God for these men who rallied around me, when I had neither the desire nor the strength to fight against my sin. They prayed for me and over me; read Scriptures with me; spent the night with me when I had had a particularly bad day and was in a time of weakness; encouraged me and spoke life into me. They basically carried me when I had no strength of my own.

There are so many beautiful scenes in Tolkien’s trilogy, Lord of The Rings. One of my favourites is near the end of The Return of the King, when Sam and Frodo find themselves on the slopes of Mt. Doom. Frodo collapses out of exhaustion and despair, and Sam tries to cheer him up by reminding him of all the good things which they left back home. Frodo has nothing left in the tank and can’t even remember anything good about the world, because of the burden of having to carry and destroy the evil ring without being driven mad by it. Frodo is exhausted and has no strength left to continue on the journey, even though they are so close to their destination.

Then the faithful Sam, who had been with him through thick and thin on this perilous journey, pipes up and says:

We all need faithful Sams to pick us up when we no longer have the strength to stand on our own for Christ!

Praise be to God for these men who rallied around me, when I had neither the desire nor the strength to fight against my sin.

Be Ready in Season and Out

As she stood there in the temple, her accusers smugly and judgmentally gazing down at…

How to Action Your New Found Faith!

When I first became a Christian, I had no idea how to grow my faith…