“To be honest, I just don’t think that God has given me that gift.”  “I just don’t know what to say to someone, where do I even start?” These are just a few of the reasons we can give for not “evangelising” or sharing the gospel with someone.

A popular quote that is thrown around and is often attributed to St. Francis of Assisi is: “Preach the gospel at all times, when necessary use words.” Now there is no evidence that St. Francis ever said this, but more importantly this is a false statement to live by, especially when it comes to evangelism. The gospel is a message. The word “gos-pel” literally means good news; it is a message that needs to be proclaimed verbally.

The gospel is a message. The word “gos-pel” literally means good news; it is a message that needs to be proclaimed verbally.

When it comes to thinking through sharing our faith or evangelizing, there are two questions that we need to ask:

1) Before we even begin to think about evangelizing, we need to have a clear understanding of what it is we are sharing with people. Often when you ask someone what the gospel is, you get anything from “God loves you” to a personal testimony. While “God loves you” is an aspect of the gospel, it is not the whole gospel. Neither is our testimony, which is how the gospel has impacted our lives, but which is not the gospel itself. So, we need to be clear about what we mean when we say gospel.

I have found that breaking it into four parts not only helps me have a clear understanding, but makes it easier to share. The four parts are as follows: 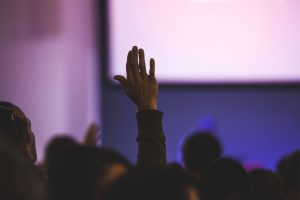 God: Oftentimes when we are thinking of sharing the gospel, we start with man’s sin, but where we really need to start with God. The problem of man’s sin is really only a problem if there is a holy and just God whom we sin against.

God is a holy God, who created the whole world and everything in the world.  He created man, Adam and Eve, in his image, to be in a perfect relationship with God, having him as their sovereign creator and ruler, living under his rule, and having dominion over the earth that God created.

Man: Though created in God’s image to live under his loving rule, man rejected God.  Adam and Eve believed the lies of Satan and wanted to rule themselves. In making this choice, they rebelled against God, bringing sin into the world and with it, the punishment of death that we all now deserve.

Christ: But, although we deserved death for our willful rebellion against the sovereign ruler of the universe, God in his mercy sent Jesus Christ, fully God, fully human, to live the perfect, sinless, obedient life that we could not live, and to offer himself up as a perfect sacrifice on our behalf, dying the death that we deserved for our rebellion. We know his sacrifice was fully accepted by God because on the third day he rose again, showing that death had been defeated.

Now we could just leave it here, but that is not the whole gospel. The gospel requires a response, which is our fourth point.

Response: Our response is to repent, that is, to turn from our wickedness and from trying to earn God’s forgiveness, and to put our faith and trust in Christ, believing that what he has done is sufficient for us to be reconciled to a holy and righteous God.

This is a very simple explanation of the gospel that can be shared in a few minutes. However, we would be misrepresenting the gospel if we were to leave out any one of these elements.

2) The second point we briefly want to touch on is, “Why am I sharing it?”

Matthew 28:18-20 is often referred to as the great commission. It is here that we have Jesus telling his disciples to go and make disciples of all nations, baptising them in the name of the Father, Son and Holy Spirit.

So, the question arises, “Who is a disciple?” or at least, “How does one become a disciple?” The simple answer is, by responding to this gospel that I have outlined in the first point. We share the gospel, we evangelize, in order to make disciples.

As pastor Mack Stiles defines it: “Evangelism is teaching the gospel with the aim to persuade” [1] We are in no way trying to manipulate or coerce someone into following Christ.

One thing that is always vital to remember, is that our responsibility is to be faithful in sharing the message.

So even if we know very little, we can still have confidence because it is through the work of the Holy Spirit that a person becomes a Christian. Ultimately, God through his Spirit is the only one who can change a person and bring them from darkness to light, bring them from death to life. We have the privilege of being a part of that as we seek to share the only message of salvation.

… as believers we are all encouraged to preach the word, in season and out of season.

This is not something set aside just for the church: as believers we are all encouraged to preach the word, in season and out of season.

Paul reminds the Corinthians in his second letter to them, that we are ambassadors for Christ, God making his appeal through us [2]. An ambassador is a representative who carries with him the message and the authority of the king.  This means that each one of us is to be ready at all times to share this message of salvation.

We never need be fearful about this because we not only carry with us the authority of Christ himself, we hold out to a dying world the only true message of salvation.

Let us be bold in faithfully sharing the greatest news that there is.

To him be the glory both now and to the day of eternity. Amen

How to Action Your New Found Faith!

When I first became a Christian, I had no idea how to grow my faith…

Where to From Here?

In the first blog post of this series, we addressed the question of how to…

Can I Become a Christian?

The answer is both yes and no. No, in the sense that there aren’t any…